The Understudy
by Theresa Rebeck
Sept 8 – Oct 4
Alder Stage
An understudy rehearsal for a fictional Kafka play on Broadway teeters on the edge of reality when Harry – the understudy for Jake, who is the understudy for Bruce, a Hollywood action star about to land a multimillion-dollar part – must work with the ill-fated production’s exasperated stage manager whose life he ruined long ago. The Understudy is a raucously funny existential exposé on human motivation that examines the underbelly of the theatre business and the personal drama behind the curtain.
• Off-Broadway and regional theatre hit comedy from the writer of TV’s Smash
• Portland Premiere

October 3 – Nov 8
Winningstad Theatre
The irresistible rhythms of Cuban music drive this riveting, universal story of a man caught between countries, losses and loves, and his search for freedom. Set in America and Cuba, this timely tale reverberates across politics, ambition and romance with quick-witted dialogue, joy-filled dance and Latin-fusion beats. This Broadway-scale, contemporary musical features the internationally acclaimed, three-time Grammy nominated band Tiempo Libre with a company of 21 actors, dancers and musicians in a not-to-be-missed theatrical event.
• Portland’s Broadway-scale World Premiere
Sponsored by The Standard

Check out the two-part feature on the making of Cuba Libre done by Oregon Public Broadcasting!
Part 1 is here. Part 2 is here. And there will be more to come!

Broomstick
by John Biguenet
Oct 27 – Nov 22
Morrison Stage
A fairytale-twisted yarn of delightful humor and spine-tingling suspense conjures a spooky seasonal experience unlike any other. With Vana O’Brien in a tour-de-force solo performance, an Appalachian witch tells a heartfelt and poetic tale of her long life from first love, to heartache, to the hair-raising vengeance she wreaks upon those who’ve crossed her.
• Critically acclaimed spellbinding sensation
• NW Premiere

The Miracle Worker
by William Gibson
Dec 8 – Jan 3
Alder Stage
One of the most triumphant stories of the human spirit ever told, the soul-stirring The Miracle Worker evokes hope and inspiration for the entire family. With dignity, perseverance and respect in the face of seemingly insurmountable challenges, a child, a teacher and a family learn to communicate. A play based on the lives of Helen Keller, who became Deaf-Blind as an infant, and her teacher, Anne Sullivan, who enabled her to become one of the most influential women of the 20th Century.
• 1960 Tony Winner for Best Play
• 1962 Academy Award-winning classic film
• Uplifting Family Classic

Mothers & Sons
by Terrence McNally
Feb 9 – Mar 6
Alder Stage
In this sensitive and wryly humorous 2014 Tony Award-nominated play, a mother, after a 20-year silence, pays a surprise visit to her deceased son’s former lover seeking a connection she can’t fathom. At his Central Park apartment, with his husband and young son by his side, he shows her that healing and hope are possible, even after devastating loss. In this play, vastly different worlds collide, yet truth and compassion rise to reveal that all dreams begin with the common ground of forgiveness.
• 4-time Tony Award-winning playwright
• NW Premiere

We Are Proud to Present a Presentation About the Herero of Namibia, Formerly Known as South West Africa, From the German Sudwestafrika, Between the Years 1884-1915
by Jackie Sibblies Drury
Mar 8 – Apr 3
Morrison Stage
A multiracial cast of six idealistic actors sets out to improvise a story about the first colonial genocide of the 20th Century in Africa, but get lost in the reality of their undertaking. The unusual presentation, humor and inevitable discomfort of this provocative new play gripped theatre hubs like New York, Chicago, London, Washington D.C. and Seattle with its unique theatrical investigation of prejudice, power and perspective. “90 minutes of original, enlightening, pulse-pounding theater… It’s absolutely thrilling … it is visceral, fiercely intelligent and entertaining.“ – Backstage
• Off-Broadway and regional theatre hit
• Portland Premiere

Grand Concourse
by Heidi Schreck
May 3 – 29
Morrison Stage
In an industrial soup kitchen in the Bronx, Shelley is a nun struggling to pray and questioning her life’s work. Her world in service to the needy, alongside a Dominican immigrant security guard and joke-writing “regular,” is rocked when a rainbow-haired college drop-out comes to volunteer. The girl’s enthusiasm and erratic behavior will change the course of their lives. With touching humor this motley group unravels the intricacies of need, the vagaries of compassion and limits of forgiveness.
• Recently seen Off-Broadway comedic drama
• Susan Smith Blackburn Prize 2014/15 Finalist
• West Coast Premiere

The Skin of Our Teeth
by Thornton Wilder
May 17 – Jun 12
Alder Stage
This comedic masterpiece spans the entirety of history, with one ordinary American family who lives through it all. Dad’s just invented the wheel, Cain is throwing rocks at the neighbor kid, mammoths and dinosaurs lounge in the family room and mom frets about how to get all those animals on the boat two by two. Through Ice Ages, biblical floods and political conventions, the Antrobus family of Excelsior, New Jersey perseveres. With an immense cast and time-set across the ages, this theatrical allegory captures the human spirit – of brilliance, idiocy and ultimately sweet survival.
• Rare and epic revival of the 1943 Pulitzer Prize winner

The Understudy
by Theresa Rebeck
Sept 8 – Oct 4
Alder Stage
An understudy rehearsal for a fictional Kafka play on Broadway teeters on the edge of reality when Harry – the understudy for Jake, who is the understudy for Bruce, a Hollywood action star about to land a multimillion-dollar part – must work with the ill-fated production’s exasperated stage manager whose life he ruined long ago. The Understudy is a raucously funny existential exposé ...
Continue reading...

Intimate Apparel
by Lynn Nottage
Guest Director TBA
Sept 9 – Oct 5
Portland Premiere
A riveting, romantic tale by this Pulitzer Prize-winning playwright about the empowerment of Esther, an African American seamstress in 1905 NYC, who creates exquisite lingerie for both Fifth Avenu...

The Big Meal
Sep 3 - Oct 6
Written by Dan LeFranc
Directed by Dámaso Rodriguez
West Coast Premiere
Set in a quintessential American restaurant, entire lives whiz by for a modern family whose stage and age are short-order fare. From birth to that inevitable last course – and every corndog, calamari and Cadilla...

Posted by Me. Posted In : Theatre

And in belated news...

January 25, 2013
To kick off the new year, I had the pleasure of spending three days in rehearsal with playwright Ellen Simon and an extraordinary cast led by Marsha Mason and Mary Steenburgen for the Pasadena Playhouse Hothouse reading of "Aunt Stossie's Coming for Five Days.

Dámaso Rodriguez -- a familiar presence in the Southern California theater scene for his work at the Pasadena Playhouse and the Furious Theatre Company -- has been named the new artistic director of the Artists Repertory Theatre in Portland, Ore. His appointment begins in J...

November 12, 2012
I am honored to be a finalist in the company of such great directors...

Geoff Elliott and Jules Wilcox star in "The Doctor's Dilemma" at A Noise Within in Pasadena Oct. 21-Nov. 25. (Photo by Craig Schwartz)

October 5, 2012
I love scenic designer Susan Gratch's design for our show.  Here's her rendering for the first of the play's four locations.  We head into tech rehearsals next week.  I'm looking forward to seeing this image come to life.  We open Oct. 20 after several previews. 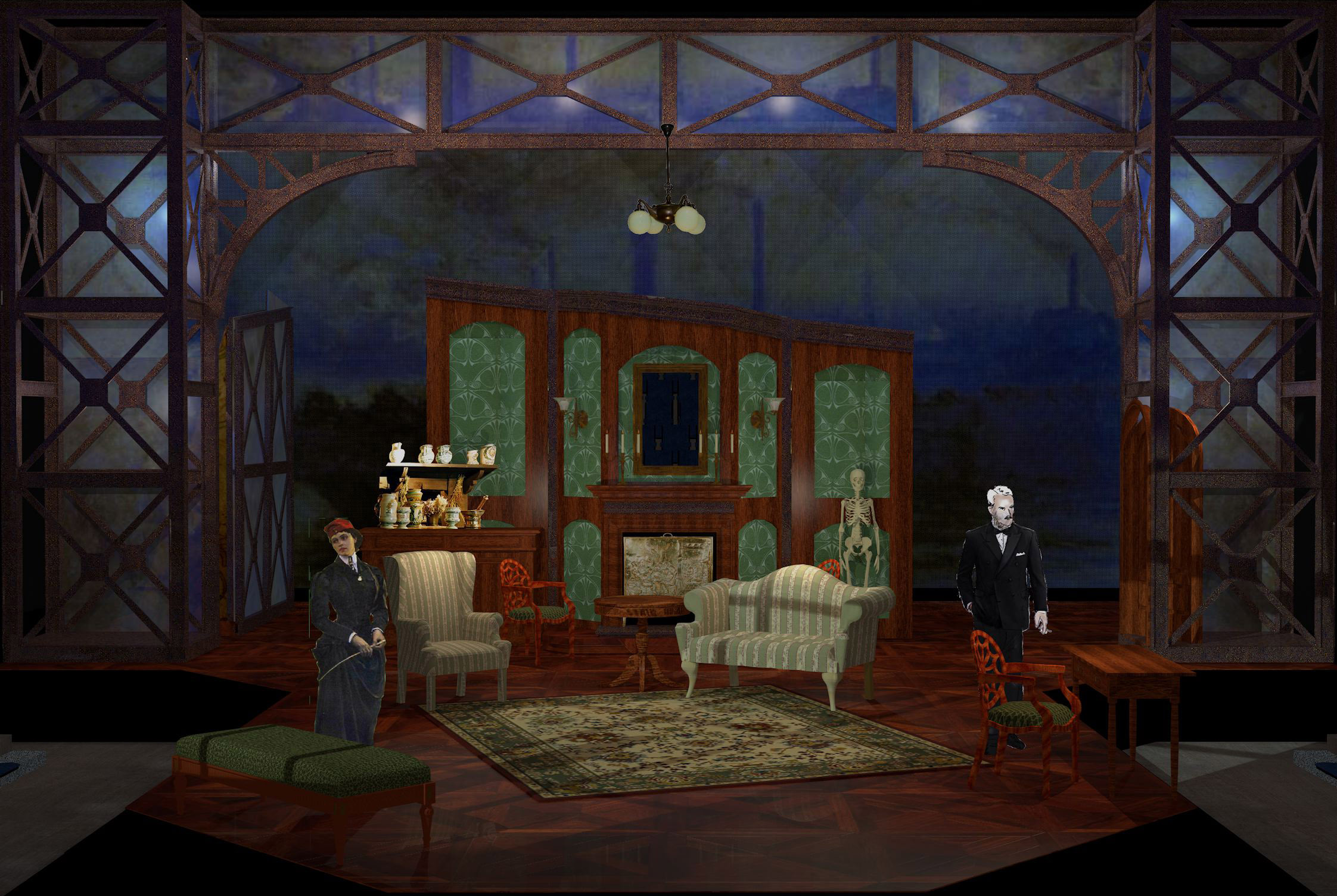 August 8, 2012
I'm working with a wonderful cast on Martyna Majok fantastic new play set in Newfoundland.  This is part of the Summer Playwright's Festival, which includes 22 plays read over the course of 8 days.  All performances serve as benefit for The Road Theatre Company.

On the rocky shores of Petty Harbour, Newfoundland, a house stands against a storm. Outside, the boats cling to their anchors and the sea churns, waiting. One by one, three banished sons return home and discover their fisherman fat...